Red Borscht - Barszcz Czerwony - traditional Polish Beet soup, clear. Pairs well with meat dumplings (uszka) https://www.polishfoodandgifts.com/uszka-dumplings-stuffed-with-meat/ Or mushroom dumplings https://www.polishfoodandgifts.com/uszka-dumplings-stuffed-with-mushroom/ delicious and great for cold winter days! No dairy products added Sold in a quart container     Red Borscht Soup Recipe (Red Beet Soup Or Czerwony Barszcz Recipe)   Printer-friendly version Borscht (Barszcz) made with red beetroot is one of the most traditional Polish soups.  The oldest known Borscht recipe dates back to the 16th century.  There are two versions, vegetarian and beef-based.  If you are looking for a Borscht recipe for Christmas Eve, simply use a vegetable broth and omit the ham bone.  The beef-based version is great for a wedding, or as a cure to a hang-over.  The following red beet soup recipe shows various modifications for any occasion.   Note that this Polish recipe is a bit heartier and thicker than most red beet soups, so just add more water or broth for a thinner beet soup that goes well with dumplings.  And, this beet soup recipe serves a lot, but it freezes well!  Just remember, you can discard the ham bone and use vegetable broth for a vegetarian red beet soup.    Red Borscht Soup (Beet Soup or Czerwony Barszcz)   • 4 Beets • 3 Qts Beef Broth (or Veggie) • One Ham bone (omit if using for Christmas Eve Borscht) • 2 Parsnips • 2 Bay Leaf • 2 Chopped Onions • Small Box of Chopped Mushrooms • 2 Chopped Apples • 1 Large Leek • Bunch of Fresh Parsley • Juice of whole lemon • 2 Tbsp Apple Cider Vinegar • 2 Teaspoon Cumin • 2 Tablespoon Dill • 2 Teaspoon Thyme • Garlic • Salt • Pepper  BORSCHT SOUP DIRECTIONS 1.  Carefully wash the beets, peel and slice thinly.  Add to a large stock pot with ham bone and add beef broth and bay leaf and let simmer for 20-30 minutes.   2.  While soup is simmering, chop the rest of the vegetables and add rest of ingredients to the soup.   Add more beef broth to cover all vegetables and simmer slowly for another 30 minutes.   3.  Remove ham bone and cut up any small pieces of meat to add back to soup.   4.  If you like a "creamier" soup, use a hand-held blender and simply blend Borscht till desired thickness.  (Some like small chunks of veggies and more of a broth for Borscht soup, so a blender is not recommended for this type of flavor). 5.  IMPORTANT:  taste soup.  You may need to add salt, pepper, dill, and vinegar.  One little trick we did that turned out amazing was to add finely chopped Sauerkraut and juice.  Typical Polish Borscht soups should have fermented beetroot juice which gives it a "tangy" flavor, but this was a nice shortcut that was better than just adding vinegar.  Make sure you use Sauerkraut that is only made with water and salt -- the real thing. 6.  Even Better:  Let this soup sit over night.  And, actually, by the 3rd day, it was the best!  Serve with a tad of sour cream. 7.  Secret:  A really fun way to eat this is with boiled Pierogi on top! 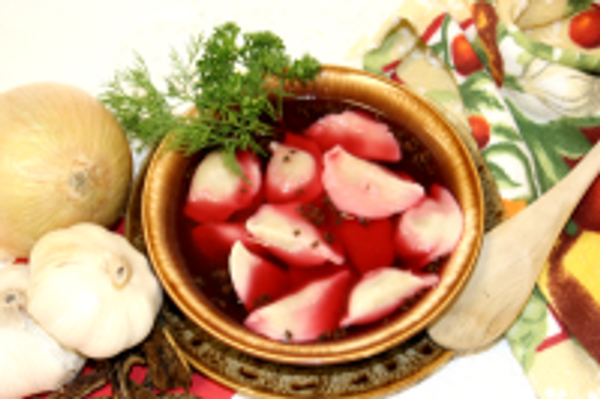 So glad I did it

This soup was a major splurge for me, considering the shipping is crazy expensive! But I'm glad I did - the closest place I can get good borscht is a 1.5 hour drive to Chicago. And even there, the place I used to go to has been closed during the pandemic. I took a chance on ordering this (and I ordered A LOT), and it's really tasty. I love it.

I have not tried the Red Borsch soup yet, can I serve it warm? Everything I tried is so good, and the juniper kalbosi is out of this world good.

I purchased this as a gift for my mother. She said it was absolutely delicious! She could have done without the dumplings. We normally serve over mashed potatoes. But, she loved it.

yummy flavor and different from the standard homemade soaps. the interesting flavor and healthy ingredients have made me a devoted patron.

We recently enjoyed the red borcht as part of our christmas dinner. It was fantastic! The flavor was excellent and the ushka was perfect. I cannot say enough how much we liked it. We will definately order it again!

I really liked the dumplings in it

Amazing! Comes frozen in a pint container with uszka... Just reheat! Very tasty, even my husband loved it compared to jarred varieties we had tried in the past.